The Corsair Sabre RGB Pro Wireless gives you just about everything you’d want from a gaming mouse, wireless or otherwise. It should be a comfortable fit for most hands and grip styles, has fantastic build quality, and offers a good amount of customisation via its iCue software. There are a few niggles that stop it from being perfect, but none of these drawbacks significantly impact the experience to the point of spoiling the appeal of this reliable rodent.

The first thing that strikes me about the Corsair Sabre RGB Pro Wireless is its weight. After playing a tonne of Call of Duty: Warzone and League of Legends, I can safely say that I don’t feel weighed down by this clicker. Creating a lightweight wireless gaming mouse is no easy task (just ask the HyperX Pulsefire Dart), and the design of the Corsair Sabre RGB Pro Wireless thankfully doesn’t compromise to achieve its 79g weight.

In fact, there are only five grams separating the wireless and wired versions of this mouse, which are otherwise more or less identical. The wired version is significantly cheaper, costing $50 USD / £40 GBP less, but this is a given disadvantage of all wireless peripherals. And while there’s a jump in cost to cut the cord, the Corsair Sabre RGB Pro Wireless is competitively priced compared to its rivals at $109 USD / £89 GBP.

It’s worth noting that there are even lighter options available, such as the Razer Viper Ultimate (74g) or SteelSeries Aerox 3 Wireless (68g) if that’s your number one priority. However, the former is more expensive ($129 USD / £129 GBP) and the latter’s honeycomb chassis design may not be solid enough for some, especially when travelling. So, while Corsair’s competitor isn’t quite the best wireless gaming mouse in terms of weight or price, it’s a fantastic jack of all trades with some advantages of its own.

Corsair’s clicker excels with its battery life. The company claims that the mouse can hold enough charge for up to 90 hours of gameplay, meaning you’d only have to charge it once every week if you use it for 13 hours every day. I get 80 hours out of my squeaker before I have to whack it on charge, which while slightly short of the rated time is still more than enough. There are also ways I could probably get more juice out of the Sabre RGB Pro Wireless, like turning down the speed or brightness of its RGB effects or instructing the mouse to enter sleep mode after a shorter period of time via iCue.

Toggling Bluetooth on with the switch on its base can help stretch the battery even further, but the lower latency of the 2.4GHz dongle makes clicking heads that much easier. Unless longevity is the name of the game, you’ll likely always have the receiver either plugged into your gaming PC or nestled in the compartment designed to house it in the mouse itself. This makes the Sabre RGB Pro Wireless one of the best gaming mice to travel with, in addition to its hardware profiles (which we’ll touch on later). 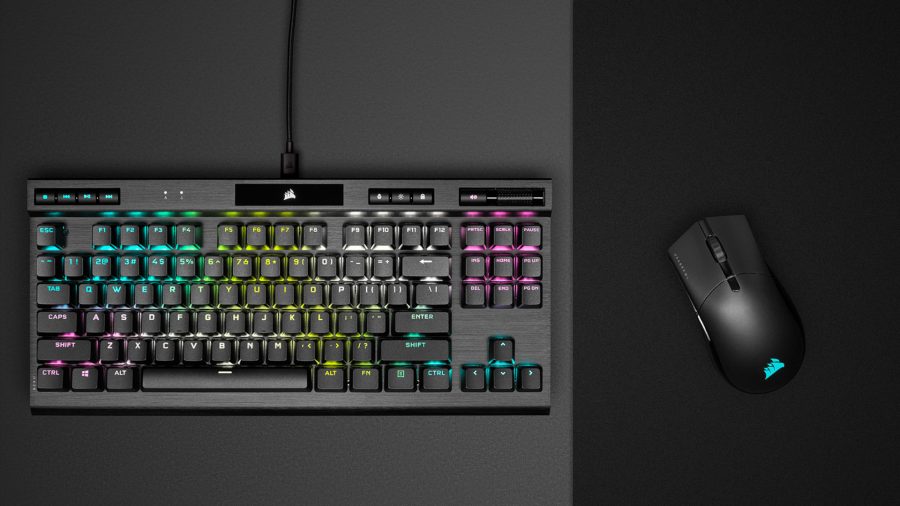 Pack it up: the Corsair Sabre RGB Pro Wireless is one of the the best gaming mice to travel with

The 2.4GHz receiver uses Corsair’s proprietary Slipstream wireless technology to communicate with the Sabre RGB Pro Wireless, and I only have a minor complaint after having spent hundreds of hours with it. The device is capable of polling rates of up to 2,000Hz and transmission speeds of 0.5ms. These specs rank among the fastest in the market, but I had to manually enable this speed, as it defaults to a still very fast 1,000Hz/1ms profile. This may have something to do with extending battery life, but I haven’t noticed any significant impact after having turned it on since I’ve had the mouse.

While you’re unlikely to notice much of a difference when switching up to 2,000Hz from its default, I’ve always been of the opinion that I’d rather my hardware and peripherals run at their highest and fastest levels of performance (even if I’m too slow to properly appreciate them). Regardless, Slipstream has yet to fail me and the connection between my mouse and rig is nothing but responsive. Honestly, I’d find it hard to go back to a tethered connection after using the Sabre RGB Pro Wireless.

None of this would matter if Corsair’s clicker wasn’t comfortable or suitable for gaming. The company says the Sabre RGB Pro Wireless is best suited to MOBA and FPS games, so I made sure to play plenty of both during my testing, in addition to other genres. I find the Corsair Quickstike buttons and Omron switches wonderfully consistent and responsive, especially in clutch moments where every input is crucial. Furthermore, if the claimed 50 million clicks guarantee holds water, they should remain this way for a long time to come. It looks great, too, except for the ‘// SABREWL’ printed on the left mouse button. 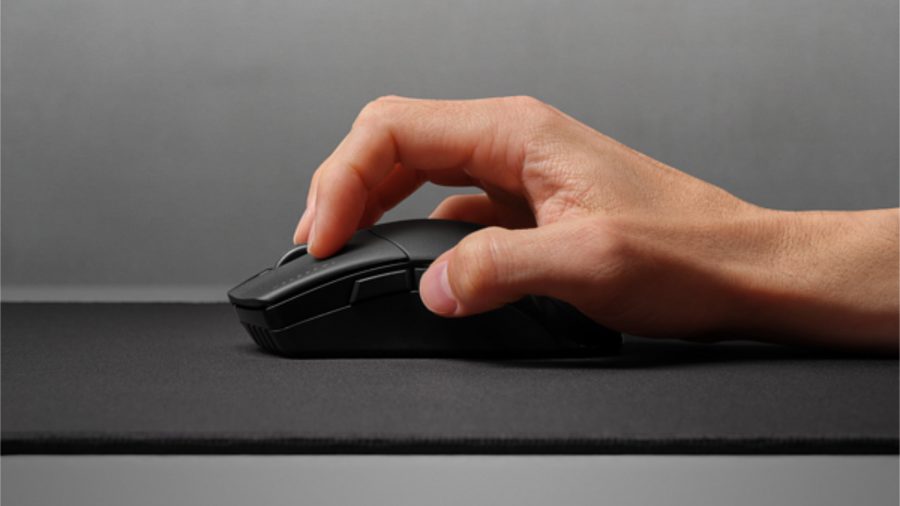 As someone who prefers a fingertip grip (yes, we exist), the ergonomic shape of the Sabre RGB Pro Wireless more than accommodates my hand. Claw and palm grips should also rest easily on the mouse’s chassis, which feels premium to the touch and thankfully isn’t a grease or fingerprint magnet, save for its glossy plastic trim.

Corsair says that it designed this clicker with help from esports professionals for competitive games, making it part of the company’s ‘Champion Series’ of products. That said, I happily use the mouse for both work and play and haven’t been left wanting. If you’re looking for something specialised and with more buttons, particularly for MOBAs, you might want to consider the Razer Naga Pro. 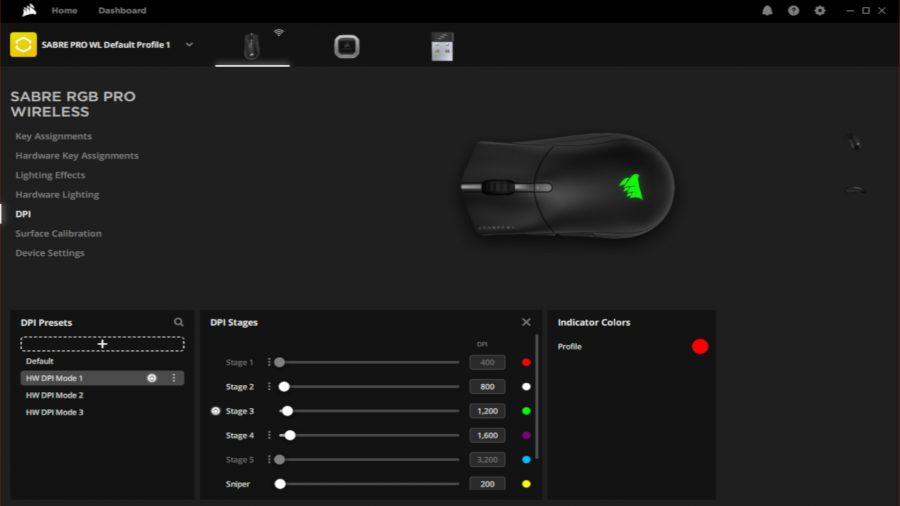 I’m already familiar with Corsair’s software since I use one of the company’s best gaming keyboards (shout out to the K70), but iCue remains one of the better controllers on the market with less bloatware than the likes of Razer Synapse.

Through iCue, you can create profiles, assign the six programmable buttons a new function, play with the lighting effects, and alter the DPI levels. They’re easy to configure to your preference, and can even activate automatically when you boot a particular videogame or piece of software. You can also save five profiles directly to the mouse’s onboard memory and switch between them via a button on its underside. The software’s ‘Scenes’ feature also helps you sync the RGB of your iCue compatible devices, but it’s similarly easy to set up your own manual configuration.

Pair your rodent with the best mouse pad

In the ‘Device Settings’ menu, you can access some key settings that I either wish were on by default or more readily accessible rather than being somewhat buried. Firstly, you should absolutely turn on the Button Response Optimisation as it helps reduce misinputs. It’s here that you’ll find the ‘Sleep Mode’ feature too, which I recommend turning on to keep your Sabre RGB Pro Wireless from burning through its battery even when you’re not using it.

Aside from that, I wish the battery gauge in the notification tray used percentages to describe the level of charge. Finally, coming back to RGB, I’d like to see a revision of Corsair’s clicker with RGB along the base, similar to the Razer Basilisk V3. This could not only act as a cool battery indicator but add to the mouse’s otherwise lacking lighting, which is predominantly blocked by your hand most of the time. 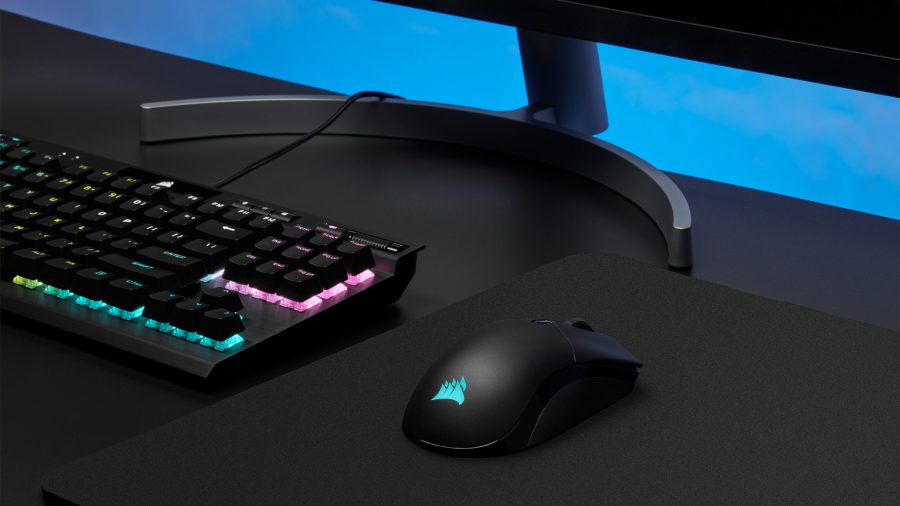 Despite some small complaints, the Corsair Sabre RGB Pro Wireless really is an excellent example of how great wireless gaming mice can be. It’s light, features great hardware, and boasts intuitive software, which all come together at a very competitive price point. You’ll often find it on sale, but even at its $109 USD / £89 GBP MSRP, this mouse comes highly recommended as a do-it-all featherweight wireless champ.