I am an absolute madman for turn-based strategy games like Fire Emblem and Final Fantasy Tactics, so I was incredibly excited for Triangle Strategy. I avoided all the demos and teasers to fully immerse myself in the game upon launch.

Triangle Strategy combines some of my favorite archetypes in the strategy game genre and puts them all into a blender. While not a perfect experience, it is, in my opinion, a must-own for tactics fans who own a Nintendo Switch.

Triangle Strategy is a tale of duty, honor, and tragedy

Perhaps the best thing I can say about the story is that it’s a real tragedy. NPCs are killed frequently, and characters often find themselves in unfortunate positions where they experience genuine sorrow.

The world feels real, and the characters that populate it are not all kind and loving. Some aspects of the game hit especially hard on me, especially the plight of the Rosellan race.

These were a race of people with rose-colored hair and were treated like subhumans, living in ghettos and being forced to mine for salt. As a Jewish person, this hit me especially hard, and many of my decisions were bent on making their lives better.

Without spoiling the story, it feels very much like Romance of the Three Kingdoms. It’s a tale of three factions, and there is a very tenuous peace between them. Salt is a significant focus of the story, an essential part of these people’s lives.

Fairly often, players will be forced to make difficult decisions. Sometimes, the players won’t even have a say-so, which comes from the unique “Voting” system. This was one of my favorite parts of the game, even if it could be frustrating.

If I were to level one complaint in the game, it would be the main character, Serenoa. He’s bland and uninspired. It may simply be so the player can project onto him, which would make sense. He’s the weak link in an otherwise incredible story.

The scales decide the parties path; the heroes must abide

Decisions the player makes matter in Triangle Strategy. There will occasionally be “exploration” sections where the main character, Serenoa, will talk to citizens, guards, and party members to try and gain clues and information.

Talking to everyone is essential, as this will potentially lead to new responses from other characters in future conversations. Sometimes, players will also need to talk to people in a sensible, logical order. Doing this is optional, but it will offer more choices and perhaps influence the path of the game.

This is because the player doesn’t get to decide when faced with a Vote. Serenoa occasionally brings out a set of scales and coins, and all of the major party members get to make a decision.

Players will see who is leaning towards what choice, and Serenoa can try and persuade them in his line of thinking – the route they want to take next. However, if you don’t make the right choices, this will fail, and the character will not be persuaded.

I love this system because I often find myself indecisive on major decisions. Now, I can leave it up to fate or try to change people’s minds. These votes will guide the player down one of two branching paths, and they have no choice but to accept the will of fate.

The Triangle Strategy has multiple endings – four in fact, and players can take note of how they play to try and get other paths and endings in this way. Decisions are made in these situations, and combat will affect the character’s “Conviction”. The first playthrough is an invisible system and how these three virtues (Morality, Liberty, Utility) grow. Thankfully, this changes in NG+.

Combat feels more like a game of chess without permadeath 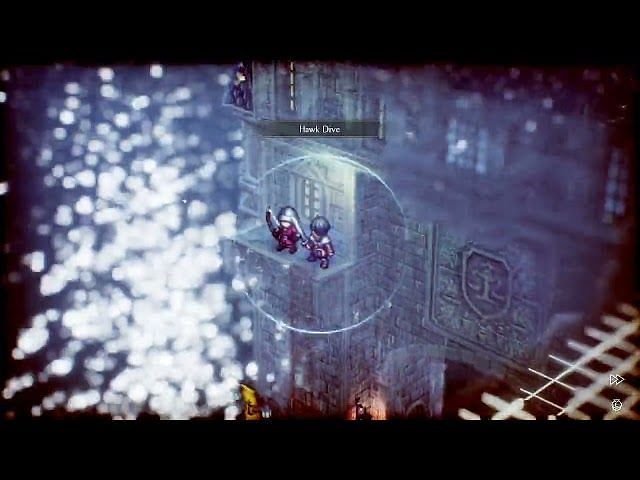 Permadeath is a common feature in tactical games like Fire Emblem and Final Fantasy Tactics, and encounters are often balanced around that. The Triangle Strategy does not have permadeath, so some battles can be incredibly difficult.

Since players don’t permanently lose characters, fights get more complicated. NPCs will often have powerful flanking positions and outnumber the player. This isn’t a negative, but it’s worth mentioning. Players can always see what characters are going next, so treating the game like a chess match is easy.

Another feature of combat that’s worth mentioning are the elements themselves. Fire, Ice, and Lightning all play a big part in the battle. Parts of the ground can be frozen and then melted with fire. If there’s water on the ground (or the battle is at a river), players and enemies alike can take advantage by firing lightning across it. This will result in extra damage.

The game will suggest units to deploy for story battles, but it’s also important to note that they will always have different units for a playthrough depending on what a player chooses to do. This creates a lot of tactical possibilities when setting up a method of attack.

Much like in Octopath Travelers, players will have ability points, and each of their skills will cost a number of these points. Thankfully, basic attacks don’t cost points, but it all makes players think about every move they make.

There are also Quietus Points, which can be purchased at the player’s encampment for Kudos. Quietus Points triggers special, powerful abilities that characters can use to gain an advantage.

Kudos, on the other hand, are far more interesting. Kudos come from playing the game tactically, attacking from safe spaces, attacking from behind, teaming up. Things like this reward Kudos, which can then be used on lore items, Quietus abilities, and my most hated part of the game, a Medal of Bravery.

All of this aside, the difficulty felt just right. Difficulty can also be changed at will, so the player can change it if it gets too hard or too easy.

Like in Fire Emblem, Triangle Strategy characters upgrade twice to new classes with more powerful abilities. It’s not a branching path here. They require a character to be Level 10 and a Medal of Bravery, then Level 20 and a Medal of Valor.

The Kudos shop lets you purchase one Medal of Bravery in the early game. The Kudos merchant will eventually restock these, but it will take time, and always in limited quantities. You receive Medals for winning story battles, but I’ve also heard they can be farmed as spoils – items enemies drop.

However, I cannot confirm that across my 50 hours with the game. I have yet to see a single drop. I like upgrading classes, but players need to know they should plan here. Figure out which party members that player will use the most, and then start using Medals.

Players only get one real weapon, too, per character in Triangle Strategy. They use resources and money to upgrade them, and each weapon has three tiers. It saves time shopping, but it did feel a little dull, to be honest.

Since you can only grind exp in the “Mental Mock Battles” at the encampment, all of the upgrading processes felt weak, but I was glad to have a way to grind, at least.

Visuals and music are incredible

I adore the graphics style used for Octopath Traveler, and it shines in this game. The way light glimmers through windows, down to vast puddles of blood for murdered characters, really stands out in my mind.

The Triangle Strategy soundtrack is gorgeous and fits the setting well. The game’s presentation was superbly done, and I felt a wide variety of emotions be displayed by these pixelated characters. The battle designs were excellent, with each major stage feeling unique and having a variety of ways to approach it, thanks to the level design itself.

Triangle Strategy was a massively enjoyable experience and not a game I’m done with by any stretch of the imagination. I have other endings to get, characters to find, and stories to unravel.

The story is excellent and tragic, how I like my strategy games. It seems like the game starts a little slow but picks up the pace swiftly. Players make several choices, all of which feel like they impact the game, which is a nice touch. That’s what makes the game most appealing.

The Triangle Strategy voting system can completely override any plans you’ve made as a player, and it’s fascinating to see it all play out in real-time. Triangle Strategy is an excellent, must-play game for fans of tactical games in 2022.