International relations isn’t a game. But it sometimes feels like one—and it’s certainly been the inspiration for many. If you’re looking to get beyond Monopoly (or even Settlers of Catan) this holiday season, here are five games inspired by or influential in the world of foreign relations.

It’s hard to describe Disco Elysium, a game that took the principles of computer role-playing games and point-and-click adventures and turned them into its own bizarre, beautiful take on politics and history. (It owes something, though, to the classic Planescape: Torment.) You play as an amnesiac police officer who wakes from an alcohol-fueled bender to find yourself charged with investigating the murder of a mercenary in a country occupied by foreign powers since a failed socialist revolution decades ago. The city’s landscape is beautiful and melancholic, evoking post-Soviet Europe—but your first challenge is retrieving your own tie from the ceiling fan and finding enough money to pay your hotel bill after you wrecked the bar last night.

International relations isn’t a game. But it sometimes feels like one—and it’s certainly been the inspiration for many. If you’re looking to get beyond Monopoly (or even Settlers of Catan) this holiday season, here are five games inspired by or influential in the world of foreign relations. 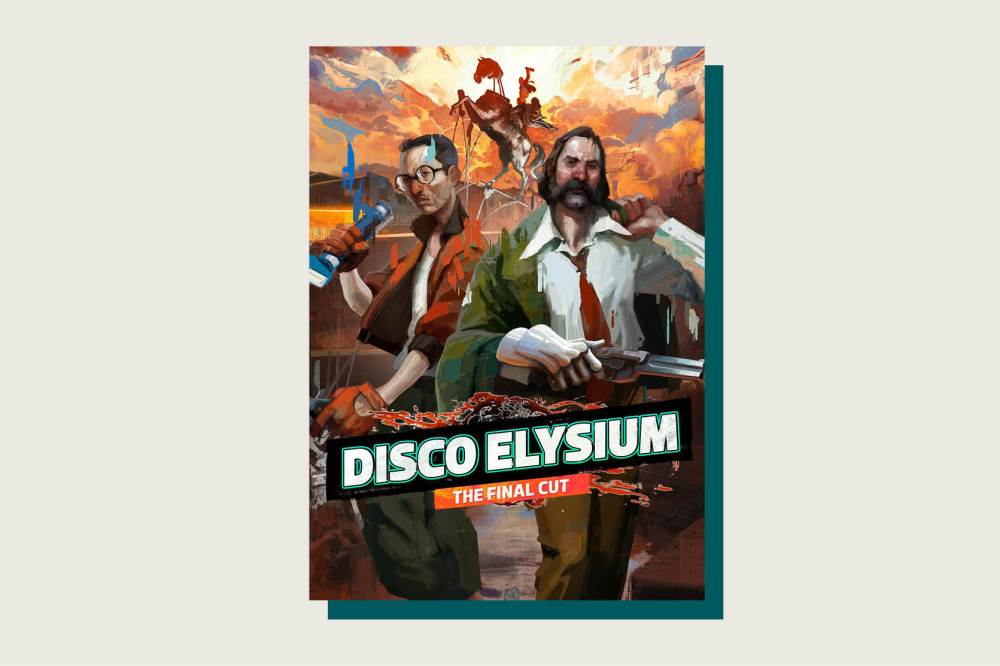 It’s hard to describe Disco Elysium, a game that took the principles of computer role-playing games and point-and-click adventures and turned them into its own bizarre, beautiful take on politics and history. (It owes something, though, to the classic Planescape: Torment.) You play as an amnesiac police officer who wakes from an alcohol-fueled bender to find yourself charged with investigating the murder of a mercenary in a country occupied by foreign powers since a failed socialist revolution decades ago. The city’s landscape is beautiful and melancholic, evoking post-Soviet Europe—but your first challenge is retrieving your own tie from the ceiling fan and finding enough money to pay your hotel bill after you wrecked the bar last night.

As you progress, you develop various skills—but the more you lean on a particular approach to find clues, from intuition to two-fisted action to rationalized Holmesian deduction, the more it shapes and then limits your actions. You also hold long, very funny dialogues with aspects of your own psyche, as well as with a fantastically well-developed (and, in the updated version of the game, fully voiced) cast of characters. The game, developed by a group of Estonians, forces you to choose a political position—and then questions, probes, and mocks whichever one you take. The story moves between comedy and tragedy, with a dash of hope as well—not least in the discovery that the world is far bigger and stranger than you might think. 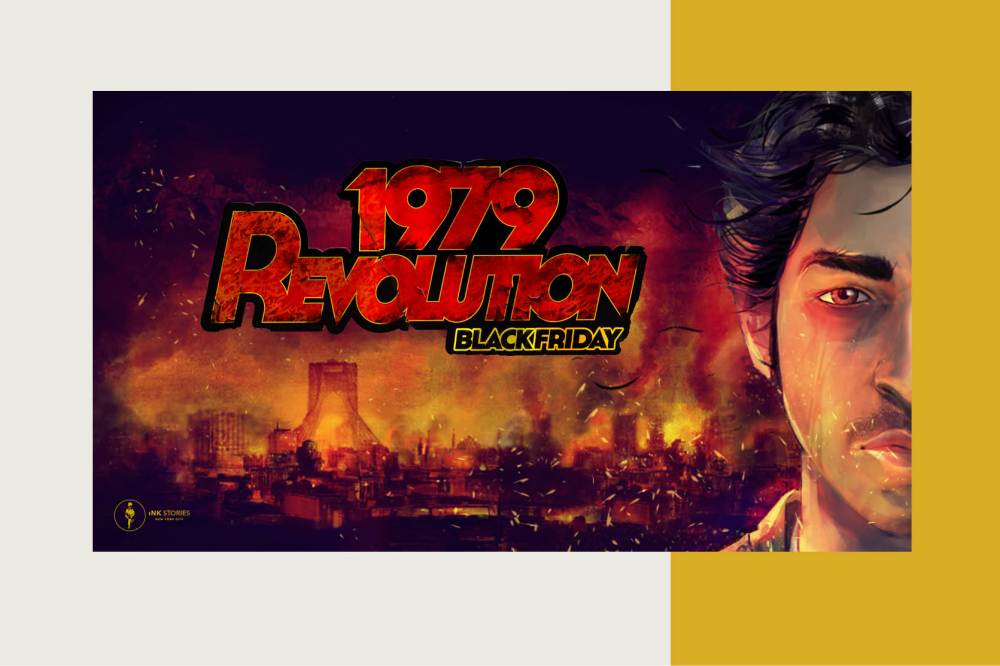 1979 Revolution: Black Friday is a choice-driven narrative drama game set in Tehran during the heady days of the Islamic Revolution. You play as Reza Shirazi, a young photojournalist who has returned home to Iran from studying abroad in Germany to find his country in the grip of revolutionary fervor. With his trusty camera in tow, Reza walks the streets of a city he no longer recognizes, interacting with people who both support and oppose the revolution and trying to navigate the tense, chaotic, often dangerous events unfolding around him.

The game does a great job of capturing the maelstrom of competing political ideologies and ideas swirling in the country at the time, exposing the player, for example, to cassette tapes of real speeches by Ayatollah Mohammad Kazem Shariatmadari, a prominent Twelver Shiite cleric who disagreed with Ayatollah Ruhollah Khomeini’s views on the role of religious leaders in politics; a propaganda poster commemorating the execution of hundreds of members of the communist Tudeh Party of Iran in the 1950s; and an offhand comment by the main character about how ousted Prime Minister Mohammad Mossadegh “was our last big hope.”

It also explores the myriad moral dilemmas of revolution. Throughout the game, the player (as Reza) must make consequential decisions, such as whether to throw rocks at soldiers trying to break up a protest or just take photographs and whether to accept or refuse the cup of tea offered by your interrogator inside Iran’s notorious Evin prison—a decision that impacts whether or not you cooperate with the interrogation.

Chock-full of historical references, authentic audio recordings of speeches, and real archival photos, the game provides a first-person view into one of the most momentous—and, for many in the West, poorly understood—periods in Iran’s modern political history. With relations between the United States and Iran extremely fraught and mistrust and misunderstanding common features of the two adversaries’ interactions, a game that offers an intimate, nuanced understanding of that pivotal historical moment certainly couldn’t hurt. 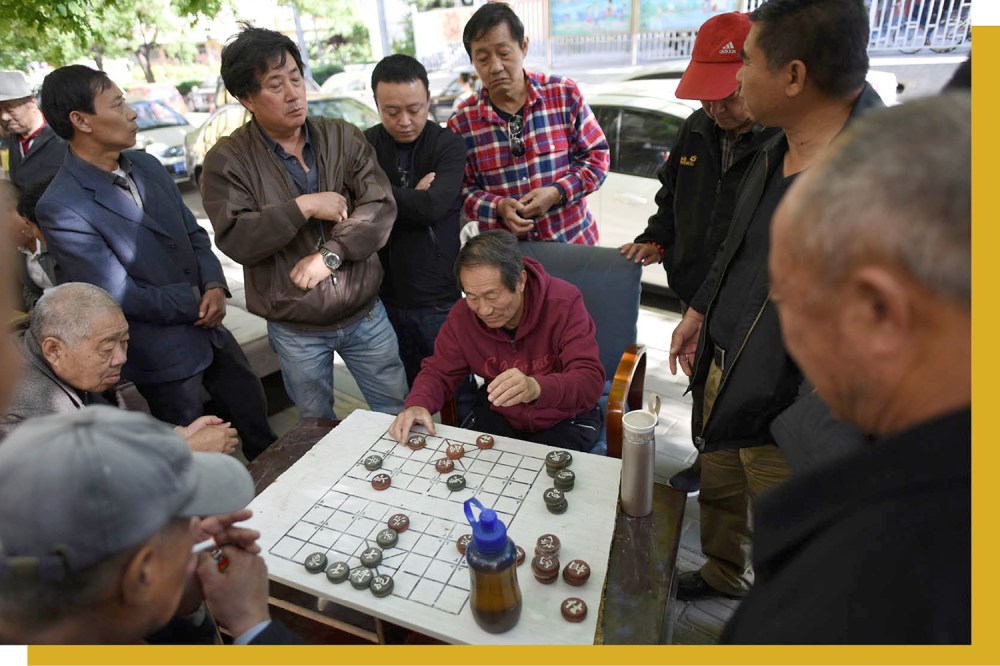 Men play xiangqi on a sidewalk in Beijing on April 25, 2017. GREG BAKER/AFP via Getty Images 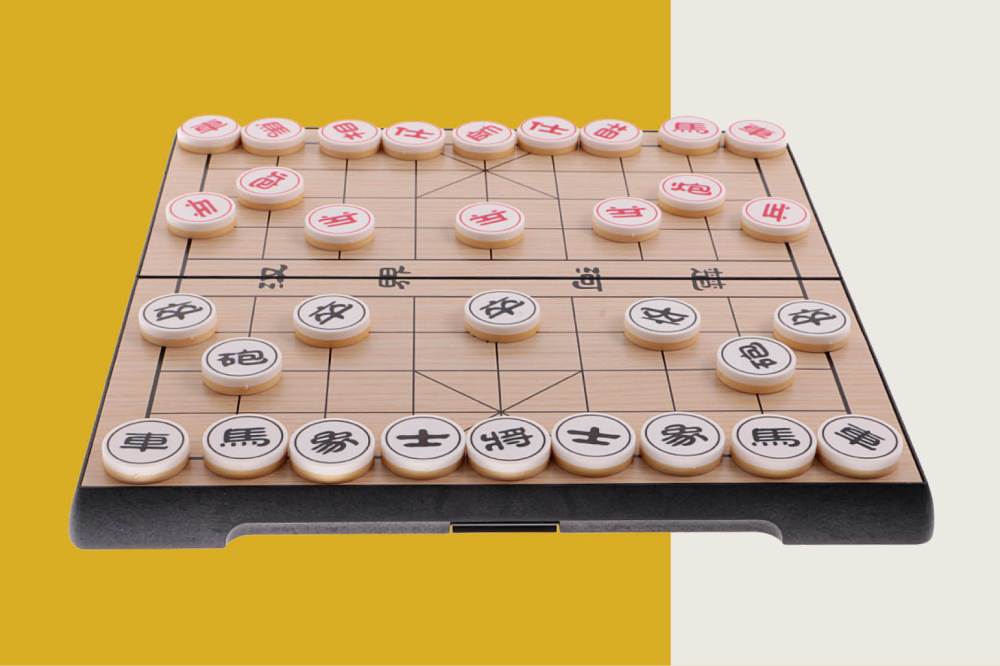 There’s a long tradition of grand proclamations that Chinese strategy is deeply influenced by weiqi, also known as Go, the stone-placing ancient board game that focuses on area control. The Economist recently claimed that Go explained China’s approach to the Indian border conflict. And the game is often contrasted with the Western fondness for chess, which supposedly represents an entirely different approach to strategy.

There’s just one problem with this. Chess is far more popular in China than Go. Go is about as popular as serious competitive chess play is in the United States, maybe a little less. Xiangqi, meanwhile, the Chinese member of the family of closely related games that includes Western chess and Japanese shogi, is a mainstay of every street corner. Small crowds gather to watch xiangqi matches, played with rough pieces on old boards.

The emphasis on Go as the supposed cornerstone of Chinese strategy, meanwhile, is pure Orientalism—plus a single line in an essay by Mao Zedong where he used it as a passing simile. It’s easy to imagine a similarly nonsensical approach to the Western way of war, such as claiming that, as the popularity of poker among leaders shows, it is based on deceit and misdirection as opposed to the straightforward, manly duels of the East. (In reality, gambling games, especially mahjong, are even more popular in China than strategy ones.)

Xiangqi won’t teach you anything about China’s supposed grand strategy, but it’s still an interesting game to learn. Beginner’s sets and instructions are widely available, and the game is close enough to chess to be easy to access; the most distinctive features are the river, which divides the two sides and limits some pieces until they cross it, and the palace, which restricts the movement of the generals (the equivalent of kings). And it’ll let you engage in the real favorite sport of China—saying “I wouldn’t have done that” while you’re watching someone else’s match. 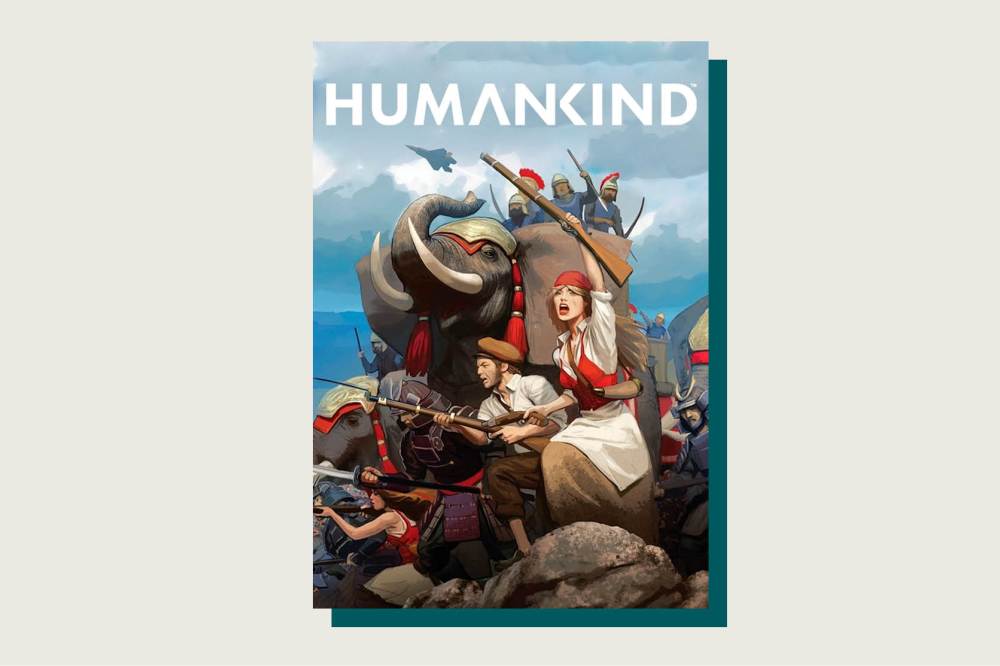 Humankind is the latest example of an old genre of computer strategy: the 4X (explore, expand, exploit, exterminate) game that begins with the player in charge of a small tribe or single city and sees it grow to become a globe-spanning empire, whether in our world or another. Civilization (now up to six different games and a couple of spinoffs) is the grandfather of the historical 4X game, but Humankind, made by a studio with a record of strong fantasy and space 4X games, was described as a “Civ killer” before launch. It’s a game that might topple the king from its throne.

At present, though, Humankind is an average, trending toward good, game. It introduces a couple of well-done ideas, such as a nomadic period in the early game before you settle and the ability to switch regularly between cultures. The base game is strong, but the balance between civilizations is off, and several aspects, such as religion and trade, feel very underdeveloped. But it has the potential, even the likelihood, of becoming an excellent game.

That’s because modern strategy games are surprisingly hard to playtest when they operate on this kind of complexity, until they actually get into the hands of hundreds of thousands of people upon launch. (Paradox Interactive, one of the main makers of grand strategy games, once had such a reputation for messy launches that it was mildly surprising when Crusader Kings III was immaculate on release.) The first wave of patches already considerably improved the game’s balance—no longer do elephants rule the battlefield or the Khmer and the Turks dominate all other civilizations. The next six months to a year will probably make the game even better.

Root: A Game of Woodland Might and Right
Available on Leder Games and Amazon 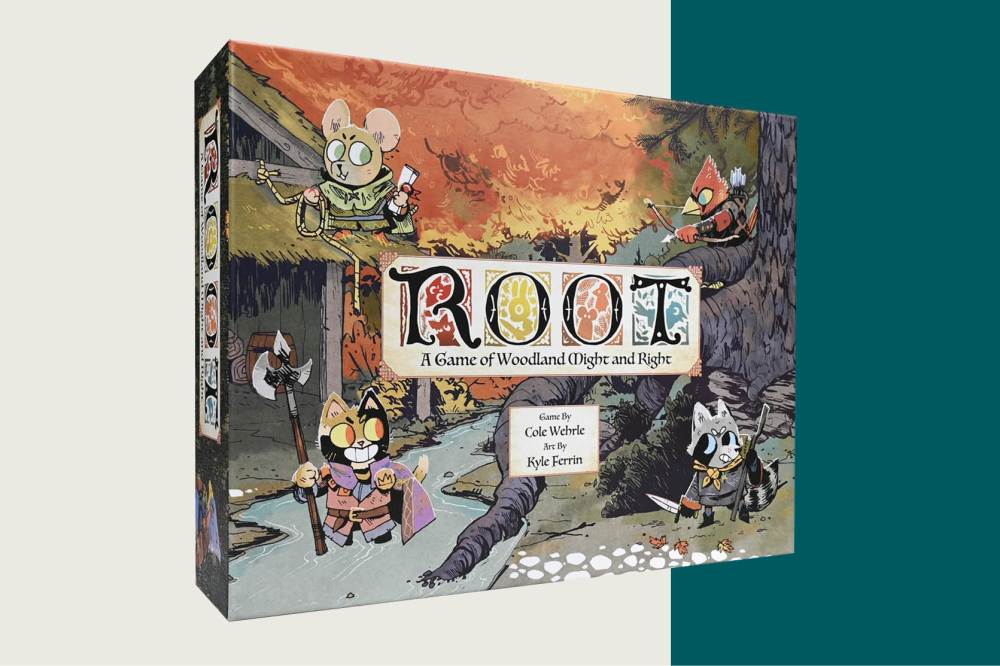 There’s a well-developed genre of board games drawing on 20th-century counterinsurgency, most notably the COIN games, from Vietnam’s Fire in the Lake to Afghanistan’s A Distant Plain. But none has been as successful as Root, a recent classic inspired by the struggles and intrigues of the Vietnam War, 19th-century India, and other conflicts. Unlike in Vietnam, though, everyone in Root is an adorable fuzzy animal.

The game’s base factions include the Eyrie Dynasties, a coalition of vultures preying on the animals of the forest that regularly collapses through internal intrigue; the Marquise de Cat, an outsider looking to exploit and industrialize the forest; and the Woodland Alliance, the cutest little revolutionaries. It’s a masterfully designed example of an asymmetric board game, in which each faction has its own very specific rules and goals. That means it takes a couple of games to get the hang of play because you have to not only keep track of your own faction but also pay attention to how close the other factions are to achieving their own individual objectives. Still, the design is clear and easy to follow, and it’s not only a very fun game but a useful way of thinking about past conflicts—without the time commitment and innumerable chits of more conventional wargames.