Horizon Forbidden West is every bit the PlayStation 5 technical showpiece that major first-party games like it need to be. Guerrilla Games renders its 31st-century version of what we know as the American West in exquisite detail, vividly bringing to life the varied biomes of states like Utah, Nevada, and California (and, in the game’s fiction, the crimson blight that is poisoning these lands and their inhabitants).

But what’s the best way — if there even is a definitive best way — to experience everything in this sprawling world? After all, the PS5 version of the game offers two different visual modes, each with its own pros and cons. Meanwhile, PlayStation 4 players don’t have a choice; the experience they get depends solely on whether they own a standard or slim console, or a PS4 Pro.

You can read our review of Horizon Forbidden West to see our thoughts on this expansive sequel to 2017’s Horizon Zero Dawn. But here, let’s dive in and discuss the technical details of the latest PlayStation blockbuster.

We’ve known for a while that Horizon Forbidden West would offer two visual modes on PS5, but Guerrilla Games hasn’t discussed the details of the graphics settings until now. And it’s only within the past few weeks that Sony has shown any footage of the game’s PS4 version.

I’ve been playing a PS5 review copy of the game for a couple of weeks now, switching back and forth between the rendering modes. You’ll find the toggle, which is marked Graphics Mode, under the Visual tab of the settings menu. The options are “Favor Resolution,” which the game says “favors a higher fidelity at a lower frame rate,” and “Favor Performance,” which “favors a higher frame rate at a lower fidelity.” How illuminating!

Since the in-game descriptions are so nonspecific, I reached out to Sony for more information. Here are all the details, courtesy of a PlayStation representative.

Even if you’re using the 30 fps resolution mode, all the menus still run at 60 fps. Neat!

The Favor Resolution mode — the default setting — runs in native 4K resolution (2160p), targeting a frame rate of 30 frames per second, with a combination of temporal anti-aliasing (TAA) and fast approximate anti-aliasing (FXAA). The Favor Performance mode runs in 1800p resolution with checkerboard rendering, targeting 60 fps. (That extends to the in-engine cutscenes, although they’re the one place where you’ll sometimes see drops below the target; the frame rate in both modes is essentially locked in gameplay.)

On PS4, the resolution and image quality depend on which model of the console you’re using. A base or slim PS4 delivers native 1080p with TAA and FXAA, while the PS4 Pro raises the resolution to that of the PS5 performance mode: a checkerboarded 1800p. As for frame rate, the game runs at 30 fps on all PS4 models; there’s no 60 fps option.

It’s worth noting that the resolution figures here are maximums — the game uses dynamic resolution in all graphics modes, scaling the image “where needed” to maintain the target frame rate in question, according to Sony.

There’s a nice touch on top of all of this (literally). Horizon Forbidden West’s user interface is rendered separately and layered atop the game — it isn’t subject to the resolution scaling — so the text and icons stay crisp at all times. (The UI is rendered at native 1080p on PS4, native 1800p on PS4 Pro and in the PS5 performance mode, and native 4K in the PS5 resolution mode.) What’s more, even if you’re using the resolution mode, which runs at 30 fps, all the menus still run at 60 fps. Neat!

PS5 resolution or performance mode — which is better? 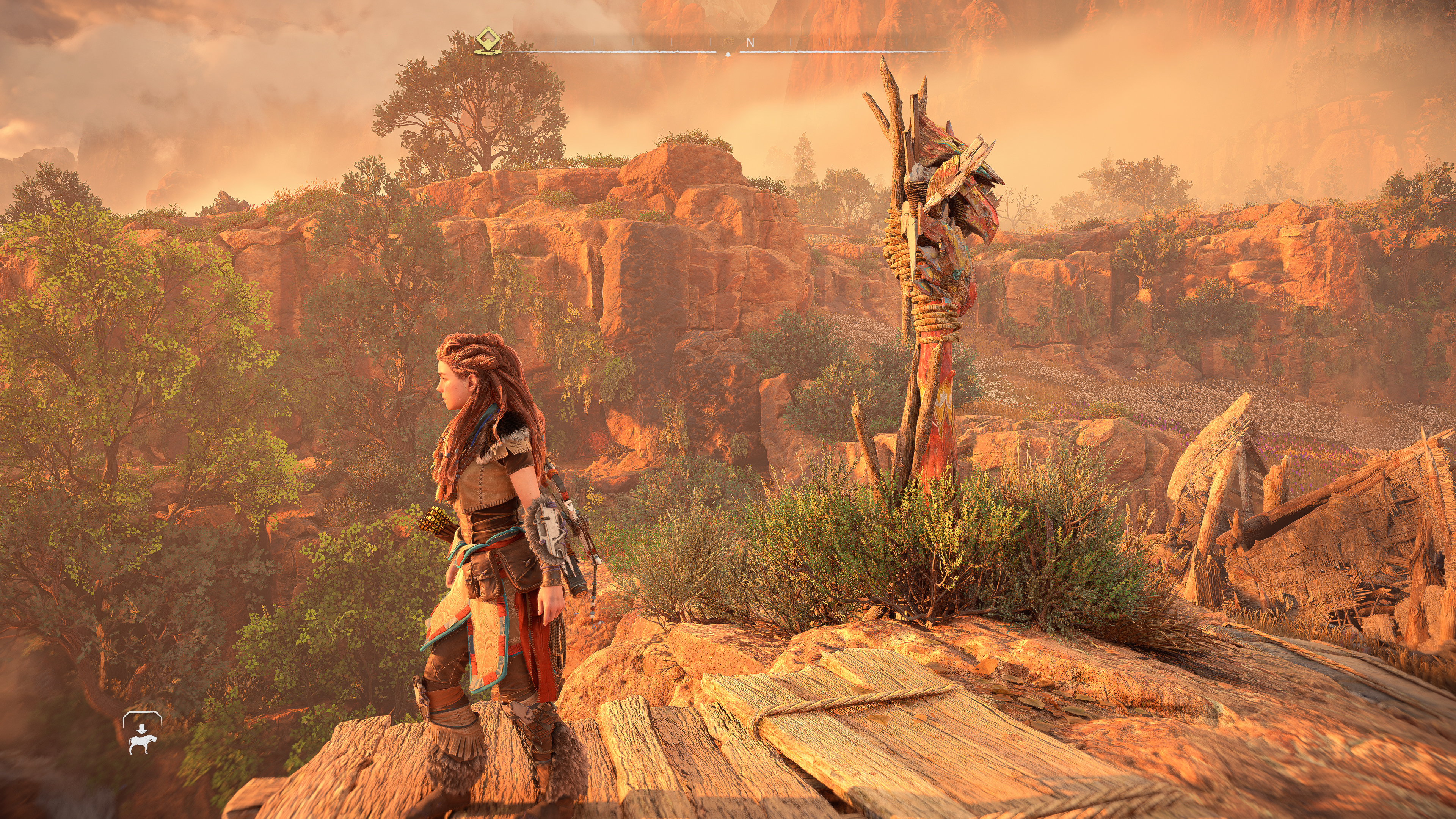 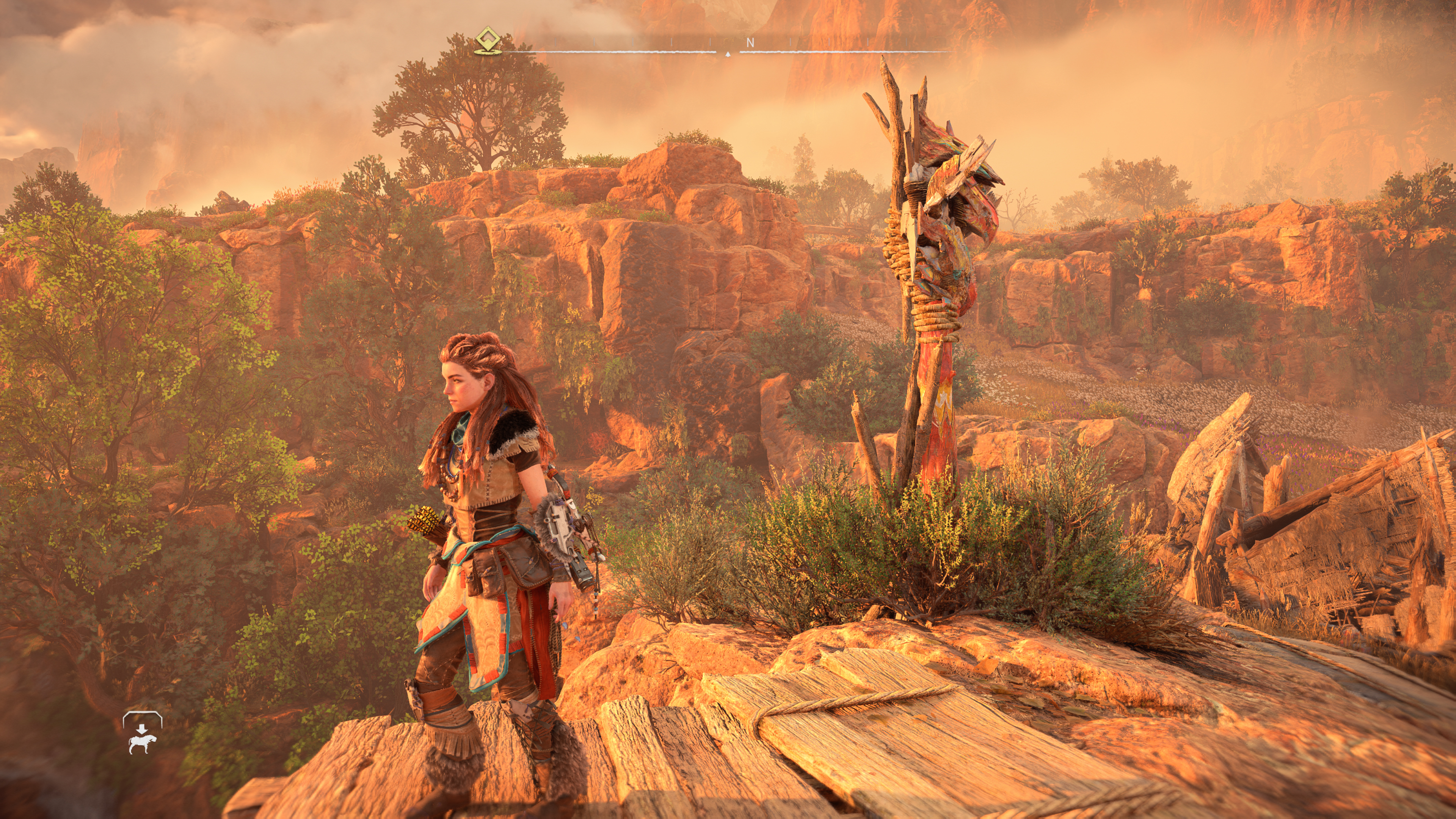 The gap in fidelity between the Favor Resolution mode (4K, 30 fps) on the left and the Favor Performance mode (1800p, 60 fps) on the right is most obvious in how foliage is rendered, especially in the distance. But also check out the texture filtering in the rope and carved wood of the Tenakth totem pole; in the thatched roof and wooden structure of the lean-to; and in Aloy’s hair and outfit.
Image: Guerrilla Games/Sony Interactive Entertainment via Polygon and Image: Guerrilla Games/Sony Interactive Entertainment via Polygon

The most obvious and noticeable difference between the Favor Resolution and Favor Performance modes is the doubled frame rate. As someone who completed Horizon Zero Dawn on a PS4 Pro in that game’s 30 fps Favor Resolution mode, I can say that it’s thrilling (and useful) to be able to play the sequel at 60 fps the first time through. In the early going, Aloy is underleveled compared to many of the machines she encounters, and the performance mode’s increased responsiveness has helped me survive some hairy battles.

At the same time, when I’m playing an open-world game, I love to explore every nook and cranny of that world. Fidelity matters more to me than performance if I’m gazing at the scenic beauty of the environments and marveling at the level of detail in characters’ clothes and equipment.

The Favor Resolution mode is, of course, the best showcase for Horizon Forbidden West’s stunning visuals. Every single frame of this game is brimming with detail, making this post-post-apocalyptic world feel full of life. Get up close and examine every flower, rock face, animal (whether organic or robotic), and human; there’s nary a fuzzy texture to be found, whether you’re above ground or underwater. The native 4K rendering coupled with Guerrilla’s mix of TAA and FXAA delivers an incredibly clean image that remains sharp even in motion. It’s unclear how far the resolution can drop when dynamic scaling is engaged, but any resulting softness hasn’t been apparent to me in this mode.

Some people may value the smooth 60 fps action of the Favor Performance mode so much that they prefer to play the whole game that way. After all, the two graphics modes look very similar in direct screenshot comparisons like the ones in this article, aside from the 30 fps mode’s expected improvements in texture filtering and texture resolution. Elements like shadows, lighting, and the draw distance look basically identical across both settings. And although the performance mode has a somewhat more controlled management of levels of detail — I’ve occasionally noticed objects or textures pop in as I approach them — this issue tends to be masked by beautiful volumetric lighting effects, whether it’s a dusty haze hanging over the desert or clouds of mist above forests and jungles.

Having said all that, the shortcomings of Horizon Forbidden West’s Favor Performance mode become more apparent when the game is in motion. And unlike in Uncharted: Legacy of Thieves Collection, the reduced image quality and clarity is a trade-off that I’m not willing to make in order to play at a higher frame rate (except, as I noted, in combat).

Moving the camera around is smoother at 60 fps than 30 fps, of course, but doing so highlights the drawbacks of the rendering techniques used in the Favor Performance mode. There is a lot of vegetation throughout Horizon Forbidden West’s world, from desert brush to mountain shrubs to leafy treetops. The checkerboard rendering can do a number on leaves and grass swaying in the breeze, causing visible artifacts on their edges. And without the Favor Resolution mode’s superb anti-aliasing implementation, there’s a distracting degree of shimmering in elements like foliage that I’ve found impossible to ignore.

As such, I’ve spent the majority of my time in the Favor Resolution mode, poring over the gorgeous environments at my own pace. When I run into combat scenarios, I pause the game and switch to the Favor Performance mode.

Does that make me weird? Actually, don’t answer that. Either way, I’m glad that the game indulges my idiosyncrasies. The ability to choose a graphics mode matters particularly in Horizon Forbidden West because of the nature of the game: It features a massive, beautiful world crafted by an army of environment designers and artists, while many of the machines and humans populating it are trying to kill you on sight. That is to say, you’ll often want to stop and smell the roses … until you need to dodge an attack from a robot kangaroo.

Horizon Forbidden West will be released on Feb. 18 on PlayStation 5 and PlayStation 4. This article is based on time spent playing a downloadable PS5 copy provided by Sony Interactive Entertainment. Vox Media has affiliate partnerships. These do not influence editorial content, though Vox Media may earn commissions for products purchased via affiliate links. You can find additional information about Polygon’s ethics policy here.